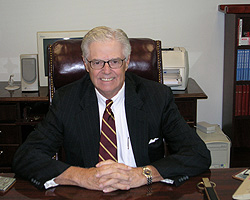 Edmund L. Walton, Jr. is the founder of the firm. For more than four decades he provided legal services to firm clients in Northern Virginia. Mr. Walton’s varied litigation practice has covered all aspects of trial and appellate work in the state and federal courts in the Commonwealth of Virginia. He has been a business lawyer to many well-known and established businesses throughout Northern Virginia, with a special emphasis on automotive dealerships and automotive management companies. Mr. Walton became Of Counsel to the firm on January 1, 2007 and continued to counsel the firm and its clients at their request until his retirement in 2011.

Mr. Walton has served as a Judge Pro Tempore and Commissioner in Chancery in the Circuit Court of Fairfax County and has been elected to the American Law Institute. He is a Fellow of both the Virginia Law Foundation and the American Bar Foundation, honors which only a few members of the bar receive. Mr. Walton’s peers in the Virginia bar have named him a “Super Lawyer.” He has been a lecturer in numerous Continuing Legal Education presentations and has served on the faculty of the Virginia Lawyers Professionalism Course.

Mr. Walton is a graduate of the College of William and Mary and received his legal training at the Marshall-Wythe School of Law of the College of William and Mary where he was an editor of the William and Mary Law Review. A veteran of the United States Army, he served with the Army Security Agency as a Russian linguist. Over more than four decades, Mr. Walton was involved in numerous civic and political activities. He served as President of the Rocky Run Citizens Association, as First Vice President of the McLean Citizens Association, as Chairman of the Fairfax County Republican Committee and as Chairman of the Tenth Congressional District Republican Committee.

He is a past President of the McLean Business and Professional Association (now the McLean Chamber of Commerce). He chaired the McLean Planning Committee and the Tysons Corner Citizens Task Force. In 1996, he was selected as the Outstanding Business Citizen of the year by the McLean Chamber of Commerce. Mr. Walton is listed in Who's Who in the United States, Who's Who in American Politics, and Who's Who in American Law. In addition, Mr. Walton has served on numerous Boards of Directors of civic, charitable and business organizations.