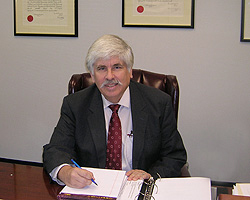 Robert Lyndon Howell has been a key strategic advisor to Walton & Adams, P.C. in the firm’s complex civil litigation practice area, as well as in real estate acquisition, development and compliance matters, since joining the firm in 2002.

Mr. Howell has been directly involved in formulating case strategy and its tactical-level implementation in the firm’s most complicated civil litigation cases and real estate transactions. Mr. Howell gives his time generously in a number of community pro bono publico activities. He has over 40 reported appellate cases.

He advised the County’s Board of Supervisors, Planning Commission, and development agencies and staff on land use, condemnation, and personnel law issues. He also served as counsel for the County and the Park Authority in numerous parkland acquisitions including over 1,500 acres near the Loudoun County border. During his tenure with Fairfax County, Mr. Howell also was the attorney responsible for a number of other major projects, including the site acquisition and construction of the Fairfax County Government Center, Police Academy, and South County Center, and most recently the acquisition of the Lorton Correctional Complex from the United States Government.